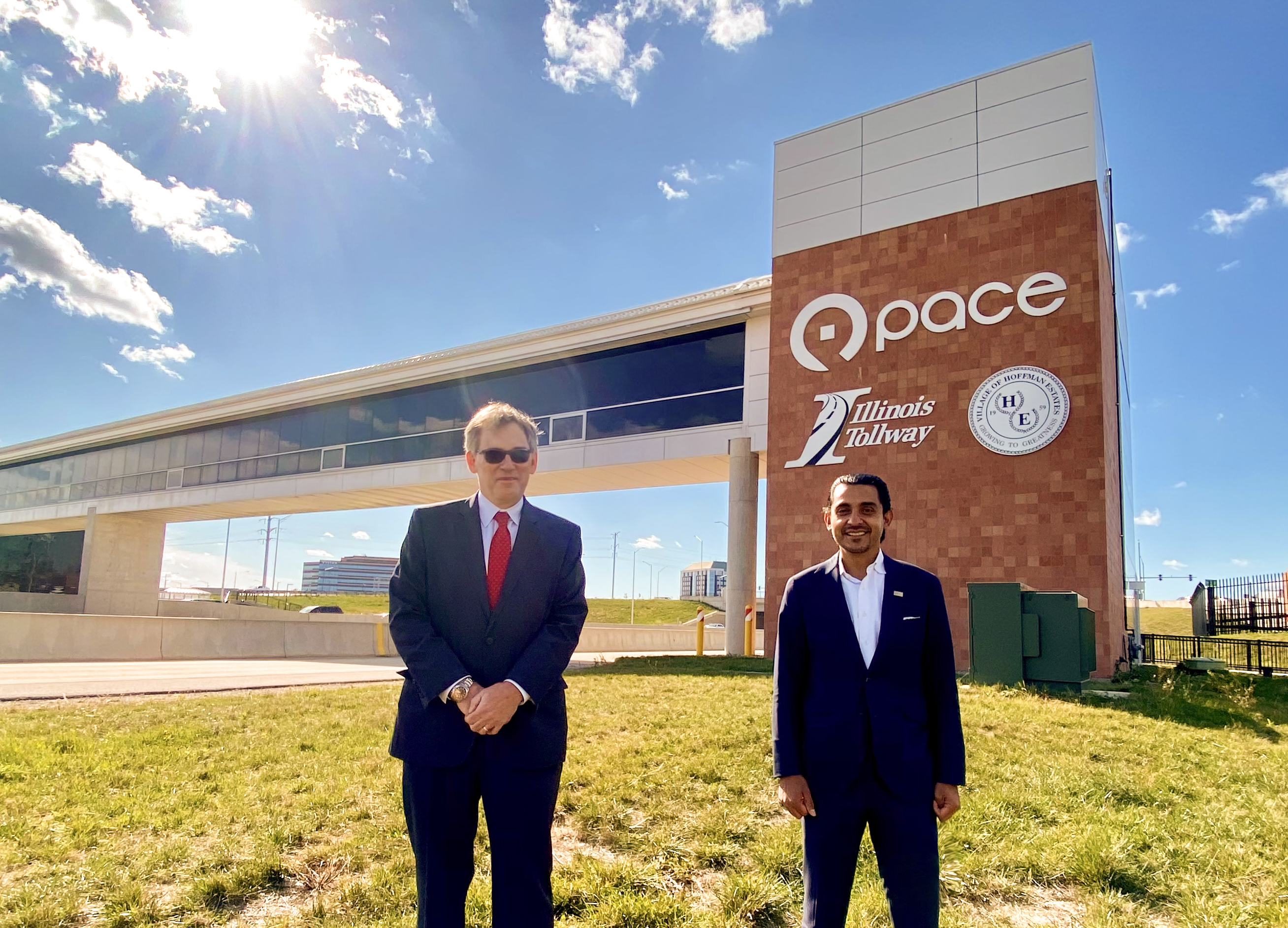 Pace Suburban Bus and the Illinois Tollway forged a unique partnership to work in coordination on expanding transit, delivering roadway improvements and improving overall mobility on the Jane Addams Memorial Tollway (I-90). Since the late 1990s, regional planners voiced the need to address congestion on Illinois’ portion of I-90, a regionally significant corridor that stretches from Chicago through Rockford to Wisconsin. Simultaneously, planners were closely monitoring the Tollway portion of I-90 between Rockford and Chicago that was originally built in the 1950s and was approaching the end of its useful life. Traffic analysis in 2010 projected that I-90 travel times would double by 2030 if nothing was done to address the growing levels of commuter and freight traffic. They determined that roadway construction alone would not be the solution. Planning for the Tollway’s investment in rebuilding and improving I-90 became a coordinated effort with Pace’s plans for its I-90 Market Expansion Program.

“Collaboration was the key to this project’s success,” said Pace Executive Director Rocky Donahue. “Every partner involved in this project ultimately has the same goal, and that’s to serve the people of this region. We worked together for the greater good and the result is better access for all to employment, medical care, education and all our region has to offer.”

“The partnership between the Illinois Tollway and Pace serves as a great example of what can be accomplished when transportation and transit agencies work together,” said Illinois Tollway Executive Director José Alvarez. “Supporting more reliable and convenient bus service on our roadways demonstrates a viable mobility solution on the Tollway system and for the transportation industry as a whole.” ​

In 2011, Pace was actively working with its local and regional partners to design expanded bus service using the framework established by its Vision 2020 long-range plan to, among other things, launch expressway-based services and invest in new vehicle technologies. That same year, the Illinois Tollway committed $2.5 billion to rebuild and widen 62 miles of the I-90 corridor that included an investment of $240 million for transit integration—the first implementation of transit service to address congestion on this heavily-traveled corridor. Consistent with Vision 2020, Pace capitalized on the opportunity to implement transit service on I-90 by applying for and receiving a $68 million federal grant to improve the speed and convenience of its services. The federal funding allowed Pace to launch its I-90 Market Expansion Program in 2016, with Pace investing an additional $4 million to support expanded service connecting the northwest suburbs and Chicago.

“Hoffman Estates is proud to be home to our state's first inline bus rapid transit station,” said Hoffman Estates Mayor Bill McLeod. “We enthusiastically supported this project and believe the economic development opportunities it creates will benefit our community for years to come.”

The most significant innovation of the I-90 Project was the construction of Flex Lanes and technology to support a SmartRoad, enabling buses (and emergency vehicles) to travel on a dedicated lane of I-90. These Flex Lanes improve travel times on a network of a more than a dozen Pace bus routes. With SmartRoad, the Illinois Tollway can take a data-driven approach to congestion management on I-90 and has been able to report to Pace (and to digital screens above the roadway) in real time when buses can use the Flex Lanes to avoid congestion. Since SmartRoad was activated in September 2017, Flex Lanes have been opened approximately 850 times to Pace buses to support travel time reliability. The Tollway is also able to continually monitor traffic incidents and travel times and communicate them to Pace’s Operations team.

The collaboration between Pace and the Illinois Tollway is a high-profile model of what can be accomplished when transit and transportation agencies work together. The partnership set a new standard for Pace and marked a paradigm shift in highway and transit planning for Northern Illinois to deal with increasing travel demands. The improvements drove ridership, improved on-time performance, and increased visibility for the suburban bus division of the Regional Transit Authority (RTA). The Tollway’s investments in a dedicated running way with real-time information provides Pace with an advantage over driving, guaranteeing reliable service for transit users. As the transportation sector looks for ways to reduce congestion as development increases, and as the public sector more broadly looks to reduce carbon emissions and contain costs, this sort of partnership is not just innovative, but imperative.