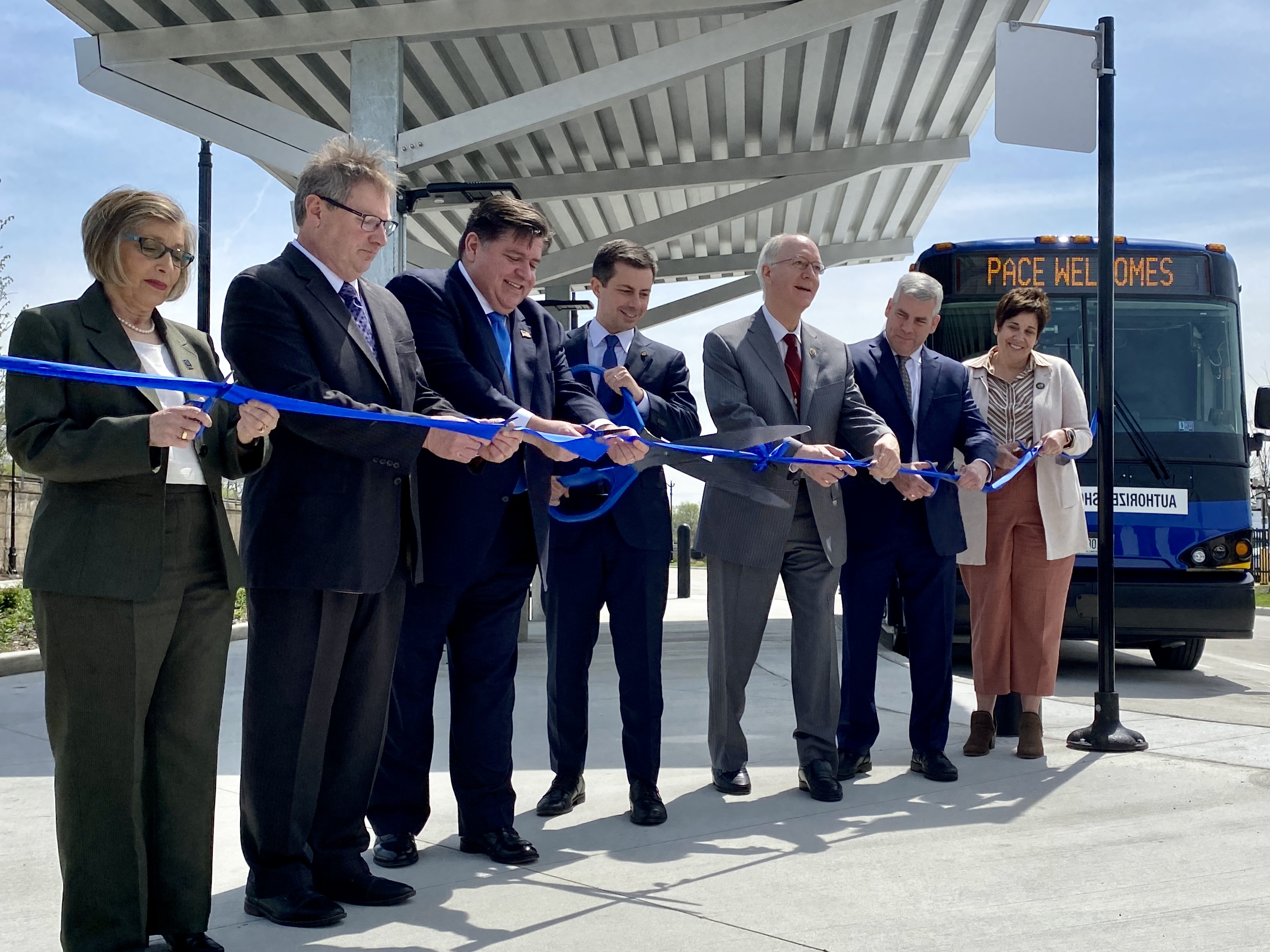 JOLIET, IL – Officials from Pace Suburban Bus and The City of Joliet today welcomed United States Secretary of Transportation Pete Buttigieg, Illinois Governor JB Pritzker, and Congressman Bill Foster at Pace’s new transportation facility at the Joliet Gateway Center. The visit showcased the results of this collaborative project funded, in large part, by Rebuild Illinois. Pace buses serving this facility were made possible through federal infrastructure funds. The modern, pedestrian-friendly facility represents an investment in a community with a historically underserved population, in line with the Administration’s Justice40 initiative and Pace’s shared values of equity and accessibility for all.

The $9.7 million transit center offers convenient boarding and transfer locations, easy-to-access transit information, waiting areas to protect passengers from the elements, and a safe and efficient loop for buses to serve passengers and quickly get back on their route. The facility, a collaborative project with the City of Joliet, was built to centralize boarding locations and make connections to Metra and Amtrak services safer and easier.

Pace Chairman Rick Kwasneski opened the event and noted that without federal and state infrastructure investments, this project would not be possible. The Infrastructure Investment and Jobs Act and Rebuild Illinois “not only provide major funding for our operations, but also start us on the path for zero emissions. 20 buses are on order that will arrive next year, and we have one that will arrive next week that we will be able to test and utilize."

The accolades continued with Denise Winfrey from the National Association of Counties (NAoC). “It is really exciting to be here, to be able to see the changes and the upgrades in the area, and to experience it firsthand. We are lucky to be able to have the opportunity to build back better, and we’re grateful for that but we are especially grateful here in Will County because we are in the middle of everything.”

Congressman Bill Foster spoke next, noting that the new transportation center was the “perfect example of historic infrastructure investments that are finally being made at all levels of government.” He went on to say, “You know mobility is so important especially out here in the far suburbs, making it easier and more efficient for people to get to work, school, doctors’ appointments, shopping centers, and restaurants. It won’t just benefit the passengers, but it will have a positive economic impact to the community as well.”

Governor JB Pritzker came to the podium next. “This hub will serve as an access point for an intracity transit, Amtrak, Metra service, and the Pace service that we celebrate today,” he said. “Investments like these do more than just connect cities. They allow our residents to access opportunities beyond their immediate neighborhoods to streamline regional collaboration and to open doors for new jobs and new businesses.”

Finally, United States Secretary of Transportation Pete Buttigieg spoke, acknowledging the Pace team and their work. “I want to acknowledge the entire Pace team and Pace Chair Kwasneski, you and your team have done phenomenal work helping to get people to where they need to be,” he said. “Transportation is one of the things that can enable the economic growth that we need to see going forward. And, of course, even for those who do use a car to get to where they’re going, investments in transit are a good thing because that means less congestion on the road for everybody else. And that also means less pollution, less particulate matter, fewer health problems associated with that, and a jump start on our ability to confront climate change.”