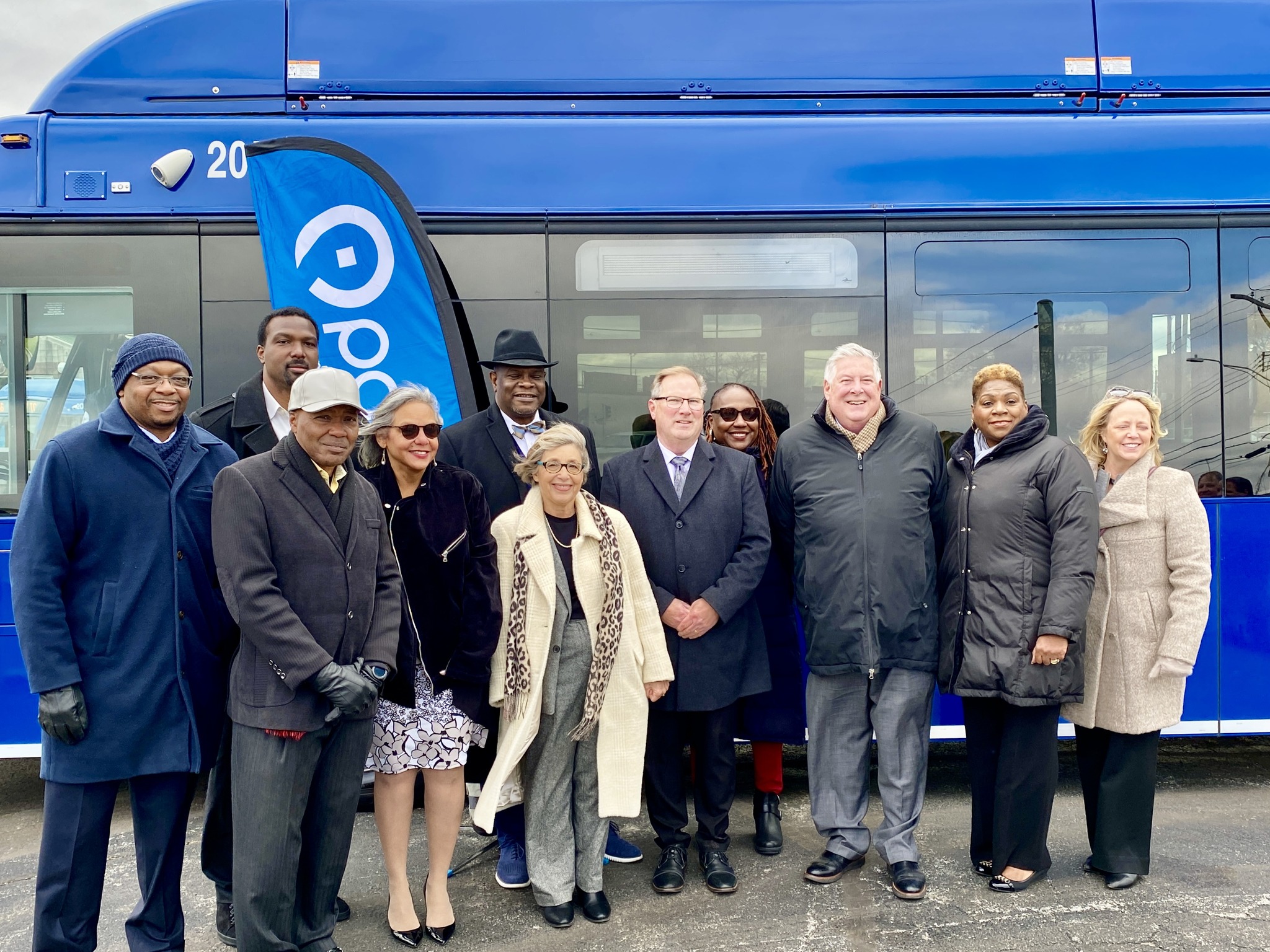 Collaborative effort between Pace, Metra, and City of Harvey invests in one of northeastern Illinois’s most historically disadvantaged communities

HARVEY, IL – Officials from Pace, Metra, and local, state, and federal government gathered yesterday to celebrate the award of a $20 million Rebuilding American Infrastructure with Sustainability and Equity (RAISE) discretionary grant to fund the Harvey Transportation Center reconstruction project in Harvey, IL. Once complete, the new multimodal facility will offer a significant upgrade for public transit riders in the south suburbs. The project is a partnership between Pace, Metra, and the City of Harvey.

“Pace is honored to be recognized with this grant and for the opportunity it gives us, Metra, the City of Harvey, the State of Illinois, and the people we serve,” said Pace Chairman Rick Kwasneski. “It represents equity and access to opportunity for all. More people board Pace buses right here than any other location in our region, so this project provides benefits for thousands of daily riders getting to jobs throughout northeastern Illinois.”

Kwasneski welcomed Congresswoman Robin Kelly to the podium, noting her instrumental role in helping Pace receive this grant. “These investments will make our transportation systems safer, more accessible, more affordable, and more sustainable for generations to come. Nearly 2/3 of these [RAISE grant] projects are located in areas of persistent poverty or historically disadvantaged communities. Now, thanks to the U.S Department of Transportation and the Biden Harris Administration, Harvey, Pace, and Metra have won a $20 million dollar grant to improve the intermodal transportation center,” said Congresswoman Kelly.

“I am thrilled to be here and eager to see this project come to fruition. This site is a major hub for the numerous daily commuters and visitors traveling around the southland and City of Chicago.  When completed, this project will make it easier for commuters to transition between the bus and rail services as well as support the revitalization of the City of Harvey’s downtown district,” said Illinois State Representative Will Davis.

The improved Pace transit center benefits some of Illinois’s most historically disadvantaged communities and thus meets the standard in the Biden Administration’s Justice40 Initiative. The project reflects an intentionally inclusive economic investment through both the creation of new construction jobs and a vastly improved facility.

Illinois Senator Napoleon Harris III was next to speak. “This is what happens when state, local, and federal come together. We make good investments into sound communities,” he said. “This is not just a win for Harvey, ladies & gentlemen. This is a win for the Southland.”

Harvey Mayor Christopher J. Clark and RTA Chairman Kirk Dillard also spoke to the cooperative nature of this project. "Working together, as local, state and federal partners, we are strengthening Harvey's status as the transportation hub of the region. The City of Harvey stop has the largest ridership on the Metra Electric Line, and this investment will improve access and equitable transportation options for all,” said Mayor Clark.

“Collaboration among the transit operators of our region and the communities we serve has never been more critical,” said Dillard. “Through strong partnerships, like the one between Pace, Metra, and the City of Harvey, we will continue to show our region is ready to put infrastructure investment to immediate use to increase access to opportunity, spur local economic development, and improve the customer experience of all who use our system.”

The Metra portion of the project will include the rehabilitation of its Harvey Station to better integrate the station to Pace’s facility. The improvements will include a new station entrance, and waiting areas, an expanded platform, new parking, and new lighting, and signs.

“We are deeply grateful to our federal, state and local partners who are making this work possible,” said Metra Board of Directors Chair Romayne C. Brown. “This project will create a comfortable, welcoming gateway to the Metra system and to the City of Harvey, as well as a more pleasant and efficient connection between Metra and Pace service. It’s a win for Metra, a win for Pace, a win for Harvey, and a win for our riders and residents.”

Pace Director and President of the Village of Phoenix was next to speak and indicated that “Mayor Clark mentioned that this is part of his redevelopment agreement to his city. To rebuild the downtown section of Harvey. We are pleased, Mayor Clark, to tell you we are here to help you in that dream and that vision.”

Pace Executive Director Melinda Metzger closed the program by noting that that the site used to be home to a Pace garage, but it was in a massive state of decay. “So, 35 years ago we moved our garage to Markham, and we built this transit center,” she said. “It was great, and it got our customers out of the elements. We now have the funding to build a facility that we envisioned for so many years. Everyone involved got on board. We went to the City of Harvey and the Mayor was our biggest supporter.”

The Harvey Transportation Center reconstruction project is scheduled to break ground in late 2024. Passengers will continue to be able to access transit services during the construction, although detours and alternative boarding locations may be in effect. Capital improvements are a top priority for Pace.  Learn more about Pace’s future plans in their strategic vision plan, Driving Innovation.

Pace Suburban Bus safely and efficiently moves people to work, school, and other regional destinations with its family of public transportation services. Pace offers affordable and environmentally responsible transit options for the residents of 274 municipalities in Cook, Will, DuPage, Kane, Lake and McHenry counties. The backbone of Chicago's suburbs, Pace serves tens of thousands of daily riders. One of the largest bus services in North America, Pace covers 3,677 square miles, an area nearly the size of the state of Connecticut and about 15 times the size of the City of Chicago. Pace's innovative approach to public transportation gives the agency a national reputation as an industry leader.

About Metra: Metra is an essential resource that safely and reliably connects individuals to the things that matter most in their lives — their work, their homes and their families.

The City of Harvey, Illinois is located at the junctions of major interstates, as well as four national and multinational railroad lines. Now under new leadership with the election of Mayor Christopher Clark and a dynamic team of Aldermen and an experienced administrative team operating with integrity, pride and unity, the City of Harvey has planned for a better future and a higher quality of life for residents.